The Midhurst Society has published a series of history leaflets, one of which tells the story of Richard Cobden and Dunford House. We do not want to repeat that same information, but here we reproduce extracts of the tribute to Cobden in the Illustrated London News on 15th April 1865.

The Funeral
On Friday week the mortal remains of Richard Cobden were buried in the churchyard of West Lavington, West Sussex, two miles from his house of Dunford. There was no pomp in his funeral, but it was attended by a long train of personal and political friends amongst whom were some of the most distinguished members of the Legislature. It was arranged that a special train should start from Waterloo on Friday morning at 9.40 so as to reach Midhurst about an hour before the time fixed for the funeral. The “Special” consisted of no less than twenty-eight first-class carriages and afforded accommodation for about 600 gentlemen. The inspector, driver, firemen, and guards were supplied with the complimentary mourning of crape hat-bands and black gloves. Every seat in the train was occupied so early as nine o'clock.

The rendezvous was at Cocking Causeway, about a mile from Midhurst, a mile from Dunford House, and half a mile from West Lavington Church. The party which has come by train reached the causeway through rural lanes, where the green buds were opening under the influence of a warm sun and the balmy breath of spring. Soon after noon the funeral left Dunford House. Here, it consisted only of a close hearse, without plumes, and four mourning coaches. At Cocking [Causeway] had assembled a deputation of the inhabitants of Midhurst, all wearing crape, and here the procession was reconstituted in the following order:

The procession moved slowly on until it reached the gate of the churchyard, which is beautifully situated on the crown of a well-planted knoll, whence, in whatever direction the eye is turned, can be seen some of the rich, well-wooded scenery of Mid-Sussex. The neat gate was carefully guarded by some of the county police, and here the coffin was removed from the hearse and placed on the bier, which caused a little delay; and then, borne by the labourers employed on Mr. Cobden's estate, who almost worshipped their kind master, the coffin was taken to the church porch. [The pall-bearers, all wearing crape armlets and hatbands, included six M.P.s, one of whom was W. E. Gladstone.] It was received at the carved oak porch by the Rev. James Currie, M.A., of University College, Oxford, Vicar of West Lavington; and the Rev. Caleb Collins, M.A., of St. John's College, Cambridge, Rector of Stedham and Heyshott, whose church Mr. Cobden was in the habit, when at home, of attending; and other members of the clergy who, in their surplices, hoods and black stoles, preceded the coffin to the chancel.

When the coffin was carried under the chancel arch, over which remains the Christmas inscription “Glory to God in the highest”, and was placed on the bier in the choir, the pallbearers and mourners, members of Parliament and gentlemen of the deputations, poured in and nearly filled the little church. The coffin, decked with a wreath of immortelles and with an abundance of spring flowers, was placed on trestles in the centre of the chancel, the clergy taking their seats in the choir. The proper psalm for the day was read by the Rev. Mr. Collins; and the proper Lesson for the day (1 Cor. xv) by the Rev. Mr. Currie. We believe that the reason why the Rev. Caleb Collins performed the main portion of the service was, that Mr. Cobden's house (Dunford) is situate in his parish, that of Heythrop [Heyshott], adjoining West Lavington. Mr. Cobden, who was therefore a parishioner of his, had often expressed a wish that he be buried in West Lavington churchyard, next to his son, who was buried there a few years ago.

There was not room in the church for a tenth part of the people who had assembled, and those who could not gain access to the sacred edifice stood on the slopes of the churchyard and on the adjoining roadside until that part of the ceremony which they could witness commenced.

On leaving the church the procession moved from the nave to the south-eastern angle of the churchyard, where the Rev. Mr. Collins, on whom devolved the reading of the remainder of the service for the burial of the dead, took his place. The coffin was partly lowered into the family vault, the hollow rattle of the earth upon the lid was audible as those words were uttered by the clergyman which consign earth to earth, ashes to ashes, and dust to dust. The mourners and the spectators walked woefully round the aperture of the vault, taking a last look at the coffin, and gradually dispersed.

The Church of West Lavington

The church is a small structure in the early English style, and capable of holding perhaps 300 persons. The open seats are of unpolished oak; there is an oak pulpit on the north side of the chancel arch; a font of Petworth marble and Caen stone is placed near the west end; there is an oak lectern near the pulpit; and the low wall which divides the chancel from the nave is of Petworth marble, with wrought-iron gates in the middle. Some of the stone carving about the pillars and brackets is very beautiful, representing the ferns of the district. Oaken stalls are placed in the choir, the floor of which is laid with encaustic tiles. The roof is of open oak, and the simple reredos is composed of inlaid wood, or parquetrie. The pulpit, the lectern and the altar, which is raised on four steps, were vested in hangings of violet and white, with crosses – violet being the colour employed by a portion of the High Church party during Lent. The stained glass in the east window represents the Resurrection of our Lord, and the other windows are likewise filled with painted glass.

Dunford House and Midhurst
This is the house which Richard Cobden built for himself upon the site of the house in which he was born, upon that estate of Dunford which his father, the plain Sussex yeoman, had occupied before him, and was purchased with the fund raised by a national subscription to make good some part of the large pecuniary loss which the once prosperous Manchester manufacturer had voluntarily incurred when he turned from his private business to redress the wrongs of England. A contemporary has noticed the characteristic scenery of “that quiet rural district in which Mr. Cobden was born, in which he had hoped to enjoy many years of life's mellow autumn, but in which it was God's will he should be buried long before that autumn had passed into winter. There is not, perhaps, in England, a lovelier country than that part of Sussex in which the now historic village of Midhurst is situated. Hills covered in foliage, valleys bright with verdure or teeming with fertility, alternate with dark sombre-looking heaths, sandy patches, and trim, silent, old-fashioned villages, and isolated farmhouses, built in the days of the Tudors. The “Manchester man” had fixed for his retreat a spot from which a factory chimney could not be seen even with a telescope, where edges of laurel, and flowers, and fruit, attested the mildness of the climate, and where the hum of the bees would replace the busy hum of industry in the regions in which his youth and manhood had been passed. Midhurst itself is the homeliest, stillest, most old-fashioned of English villages. Once a week a corn market imparts some life and bustle into its clean, quaint, zigzag streets, but at other times one might pass from one end of it to the other at high noon without meeting half a dozen people. Pleasant, green country lanes, however, lead out of it in every direction, and perhaps the prettiest and most rural of them all winds up to West Lavington Church, in a vault of which was to be laid the mortal part of the great free-trader.” 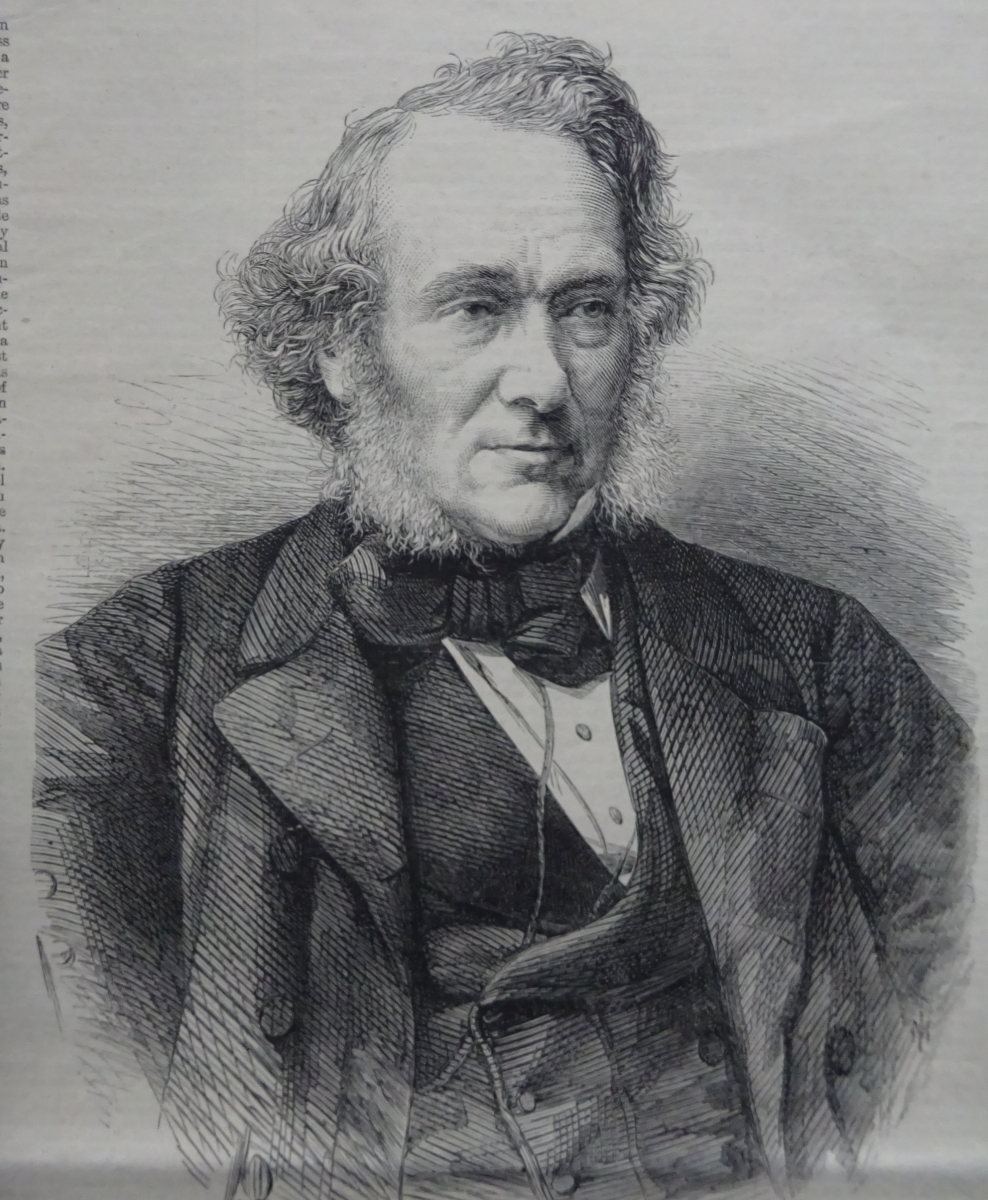 Engraving of a photo by Messrs Downey of Newcastle 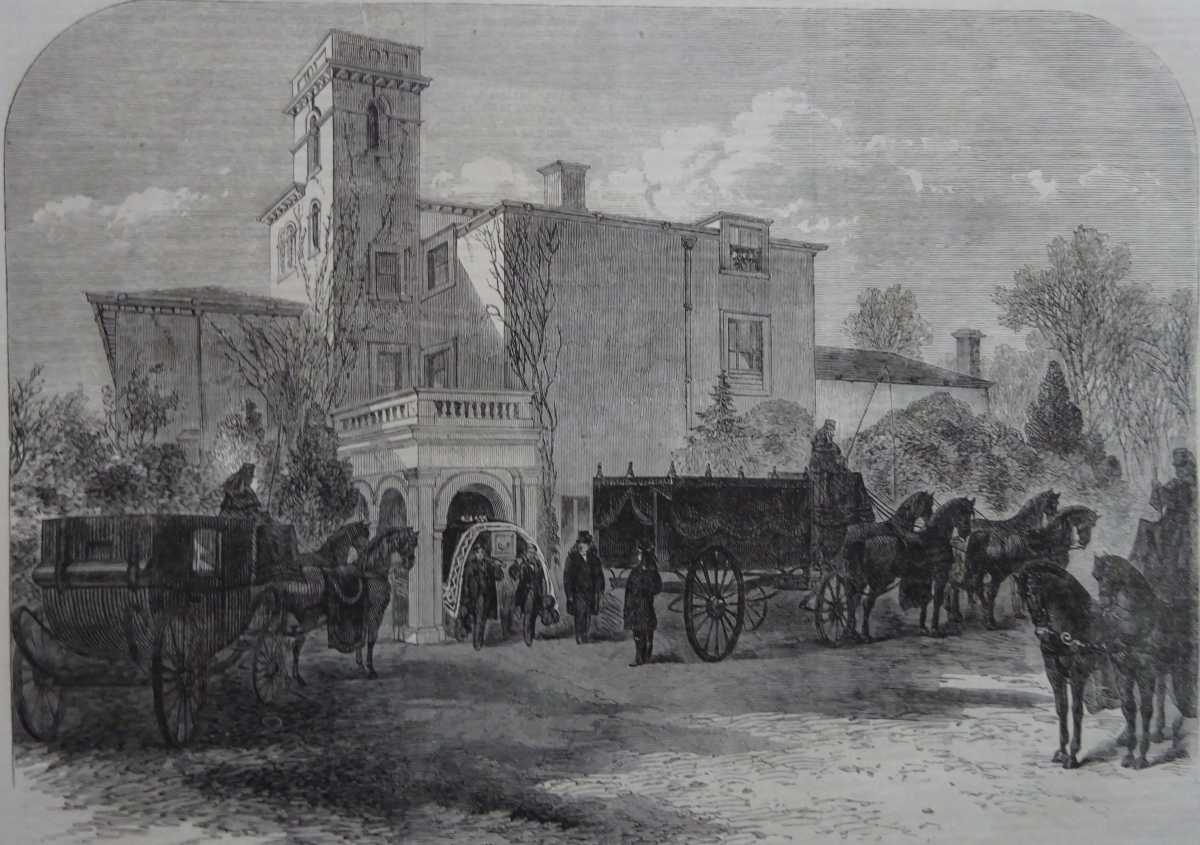 The departure from Dunford House

The Procession at Cocking Causeway