South Pond probably dates from the twelfth century, created to hold stocks of fish.  Perhaps at the same time, but certainly by the thirteenth century, South Mill was in existence.  But The Wharf did not come into its own until 1794.

The Industrial Revolution required improvements in the way that goods were transported, and the eighteenth century saw a huge expansion in the canal system.  West Sussex was notorious for its muddy roads and high ridges, and when the Arun Navigation was completed in 1791 the Third Earl of Egremont obtained an Act of Parliament allowing him to improve the River Rother above Fittleworth.  His original idea was to provide navigation from Stopham to his estate at Coultershaw, but William Jessop, the leading canal engineer of his time, persuaded him to extend the canal to Midhurst.

The venture needed an Act of Parliament, and this was obtained (three readings in the Commons and one in the Lords) in forty days, but when it was offered for tender there were only three responses.  The lowest quote, from Charles Jones and his son Charles, was accepted – perhaps somewhat surprisingly, because they were unable to offer sureties or guarantees.  And Charles had a reputation, with a trail of unpaid bills behind him, drunkenness, and terms in prison, and had been described thus in a court action: “neither a skilful artist attentive of his business, nor honourable, but vain, shifty, and artful in all his dealings.”  In fact, Jones eventually withdrew from the contract with large debts.

In those days, most canal work was carried out by navvies (navigators) who lived away from home and were sometimes an unwelcome disruptive presence in rural communities, but on the Rother Navigation, some of the skilled tasks were performed by local farm labourers.

The Western Rother Navigation, providing access for boats with a draft of three feet, covered the 11.5 mile stretch from Stopham to Midhurst, rising through an elevation of 54 feet with the construction of eight locks.  2 miles had been saved by new cuttings that went straight across the winding bends of the river.  Corn and groceries (in later years, coal and chalk) were transported up-river, and timber and corn down-river.

You might expect that the other large local landowners, the Montagues, would have taken a keen interest in the new navigation, but they had other things on their minds.  In 1793 Cowdray House was destroyed by fire (the ruins are visible across the river at the end of The Wharf) and the young Viscount Montague was drowned in Switzerland.

A wharf basin was built in Midhurst, 132ft by 65ft (the site now occupied by KerryType) capable of taking three barges.  A new lane was constructed, providing a link to the Chichester Road 150 yards away, and the stream from South Pond was diverted to its present course.

The project was not without its problems.  The new quay was destroyed three times – twice by flooding and once by vandals.  The spring of 1795 was cold and icy, and the labourers had to be bribed with ten bottles of gin and a great deal of beer to go into the water to ‘bottom’ the basin, but work was completed in April and the canal was formally opened on 24 June 1975.  Lord Egremont arranged a great feast at Midhurst that cost him £60.

Boat arrivals and departures were supervised by the Wharfinger, who lived in a cottage built for him by the new bridge.  Huge logs were brought down to the Wharf from as much as ten miles away, and had to be stored until they could be loaded onto a barge.

In 1816 Lord Egremont’s Arun and Wey Junction Canal was opened, and Midhurst was connected with a network of waterways stretching to London, Bristol, Liverpool, the industrial Midlands and North, and the English Channel. There was now an alternative and safer route for cargoes coming in from the West Indies, which didn’t have to contend with the French privateers lying in wait at the mouth of the Thames.

Gas became widely available for heating and lighting in the nineteenth century, and in 1860 the Midhurst Gasworks was established in The Wharf.  Coal was unloaded from the barges and kept in pens, and there were stables and wagon sheds.  It was a hive of activity, The coke remaining after burning was sold, often to young children with handcarts, sent by parents and neighbours.  In the Census of 1901, a Frederick W. Dredge is shown residing in The Wharf, occupation: Gas Manager.  A little earlier, round the corner in South Street, lived Horace Byatt – Headmaster of Midhurst Grammar School.  One of his pupils lodged with him – a young man by the name of Herbert George Wells.

A pumping station was also installed by the river, in an attractive Victorian building since replaced by the more utilitarian building you see today.

In its heyday, between 1813 and 1863, cargoes carried on The Navigation consistently exceed 10,000 tons per annum, but it was beset by problems.  The canal tunnel at Pulborough was too narrow to accommodate a towpath.  The boatman had to unhitch his horse and ‘walk the boat through the tunnel by lying on his back and pushing on the roof with his feet.  If he was lucky, his horse was waiting for him at the other end!  The system of toll charges was complicated and caused endless disputes.  More fundamentally, large parts of the route were on flood plains, and damage to locks, bridges and towpaths was a regular occurrence.  And the Rother in full spate brought down sand and gravel that was deposited in stretches of the canal and caused silting.

The Industrial Revolution that had given rise to the canal movement also sounded the death knell for the canals.  The railways provided a faster alternative, and in the second half of the nineteenth century canal traffic was in decline.  The last barge departed Midhurst in 1871 carrying a cargo of timber.  The ‘Eleanor’, pulled by horse, arrived in Weybridge ten days later.  For a while, pleasure boats continued to use the Western Rother Navigation.  It was possible to row to Fittleworth and back for sixpence.  An 1895 guide offers skiffs for hire from William Port (actually, the boats were owned by his mother) but his boathouse in The Wharf was destroyed by fire in 1912.   The navigation was still in use for leisure activities until 1936, and there are published accounts of journeys in 1912 and 1920, but sections of the waterway became silted up and choked by weed.
In the latter part of the twentieth century there was a renewed interest in Britain’s canals, and volunteer groups in many parts of the country started revival schemes.  The Wey and Arun Canal Trust is working on several sections of ‘London’s lost route to the sea’.  Perhaps one day, the little spur to Midhurst will be re-opened!

Today, residential development has extended into The Wharf, along with light industrial units.  For a time, the town’s fire station was located here after moving from Market Square.  The Wharf now provides a link in a circular walk taking in The Grange Leisure Centre, South Pond, the Rother Walk, St Ann’s Hill, the Market Square and West Street.  Alternatively, by turning right at the bottom of The Wharf, over the bridge by the Wharfinger’s Cottage (look out for the carved head on the parapet facing the river) a path rises towards West Lavington.  Turn left, above the cottage, on a path once known as King John’s Walk, with the river far below.  It can have no connection with King John, and perhaps the name derives from the Commandery of the Knights of St John, which owned land in Midhurst.  This whole area is a hidden gem, well worth exploring. 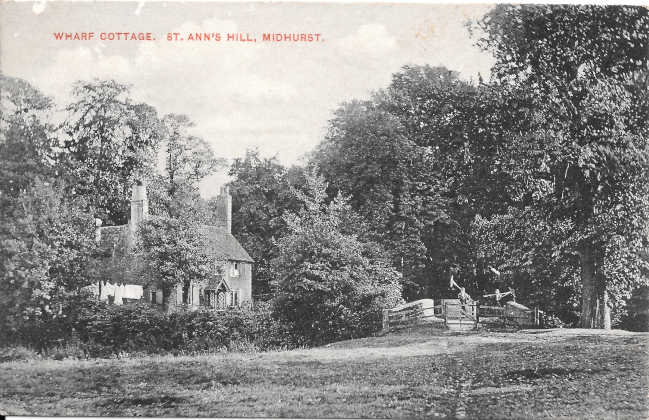