About In Living Memory Project

WELCOME TO
MIDHURST IN LIVING MEMORY

What is oral history? It is the collecting, recording and preserving of personal experiences and observations of local people. It takes the form of eye-witness accounts about the past, even the recent past, and is an invaluable way of recording the memories and experiences of older people.

“Midhurst in Living Memory” is an attempt to gather local history from those who lived in Midhurst in the twentieth century. We hope it will become a valuable resource. It is full of life and humour, joy and sadness and it is about the people of Midhurst.

The project has resulted in a book recording some of those memories, published in September 2010. “Midhurst in Living Memory”.

The background to the Project

How we went about it.

The project was first discussed by The Midhurst Society in the autumn of 2005. A steering group was formed and the Society gave £500 to purchase recording equipment. A Pilot Study was organised, developed and evaluated.

Enough memories were collected to convince us of the importance of such a venture and MIDHURST IN LIVING MEMORY was launched at an exhibition in March 2007. With over a thousand visitors we were in no doubt about the popularity and worth of the project.

The Society applied for Heritage Lottery Funding, and was successful in gaining an award of £26,900 in December 2007.

We recruited a small band of interviewers and we were off…

Interviews were conducted all through 2008 and at the start of 2009 it was decided that there was more than enough material for a book, and, apart from filling-in gaps, very few more interviews were undertaken. A start had to be made on the book, to meet the Lottery Funding deadline.

The transcripts were read and stories with a similar theme, namely the war, school, childhood, etc. were collated into chapters and formulated into the book “MIDHURST IN LIVING MEMORY”.

All the interviews were transcribed and archived, together with a CD, at the West Sussex Records Office in Chichester.

We are aware that this Project could continue for many years, there are many people who still have stories to tell and who would be more than willing to tell them. We have only just touched the surface but time and funds are finite. 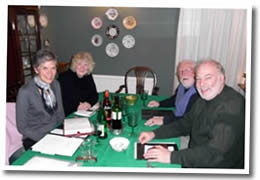