The book “MIDHURST IN LIVING MEMORY” contains hundreds of memories from nearly 120 people. Some of the favourites are:

From Mrs Anne Cooper, recording her memories of war time in Midhurst.

“ Midhurst was so confident of safety that the Rural Council at the beginning of the war refused to install an air raid warning siren, saying it would disturb the residents’ sleep. They fitted red lights to the street lamps instead, which of course had to be switched off at night to comply with black-out regulations. The Sunday Pictorial had a field day, its reporters calling Midhurst ‘the most cockeyed town in England’. We got our siren”.

“There were four big gasometers at the gas works down at The Wharf and on Saturday mornings from about nine until twelve, if we took a pram or a truck, we could get it filled up with coke for about 2d. People used to do this to bolster the coal up, and as boys we all had trucks with old pram wheels and we had a thriving little business. The first truck load had to be for mother and we didn’t get anything for that, but then there were people who hadn’t got sons or children so we then galloped back down to The Wharf for another truck of coke – you paid your 2d and sold it for 4d”.

And from Mr Bryan Trusler, also about his childhood:

“When the estates were large houses with large gardens, almost parks, they all had orchards, which, as you can imagine to hungry boys in the war years, was a great attraction. That’s where our ‘five-a-day’ used to come from. We used to scrump apples and pears and plums and whatever we could get our hands on. Many a time we got a thick ear from somebody who caught us, but we survived! “ 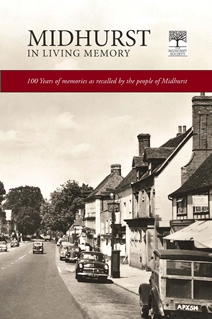 From Mr Tony Beck about Midhurst in the 1930s:

“When I was growing up we had four gentlemans’ outfitters, Morleys, Hendersons, Gillhams and Packhams and a haberdasher, Robertsons; we had two fish shops, Willshires and Farnes; we had five grocers, Pescods, Stanfords, Pearces, the Co-op and the International; four greengrocers, Aylings, Goldrings and there were two in North Street, Churchers, and another, Gales, further down next to the cinema. We had three cycle shops, Dales, Daniels and Holdens, we had six butchers, Blackistons, Merritts, Marshalls, Farnes, Knights and the London Meat Co., and there was also a pork butcher (Porky Woods) at the top of Church Hill, we had three chemists, six sweet shops, we had our own tailor – Eric Waller – we had three coal merchants, a saw mill, a saddlers and a blacksmith. And we used to have a “proper” Post Office”.

And from Mrs Marjorie Bishop, our oldest contributor, about life at home when she was a child:

“I was born in a little cottage in the Market Square; I was the eleventh child – I had five brothers and five sisters. We all had to go to Sunday School every week. We had no toys so we played on St Ann’s Hill at whatever game – football, cricket or mums and dads. On Saturday nights my mother used to get the bath out in front of the kitchen range and we used to line up for our hair to be washed first, and then step into the bath. Our nightdresses, or nightshirts for the boys, used to be on a line in front of the fire to get nice and warm”.

Copies of the book,”MIDHURST IN LIVING MEMORY”, are available at Wheeler's Bookshop in Red Lion Street.