Andy Robertson has lived in Midhurst most of his life and has participated in many activities within the town. His father, Robbie Robertson, ran the Draper’s shop next door to the National Westminster Bank, at the top of North Street from 1927 onwards. 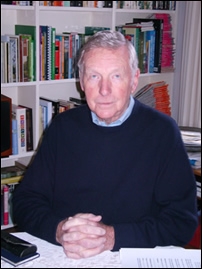 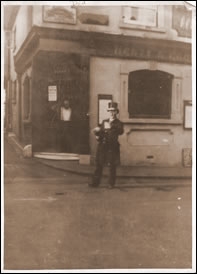 I can remember very clearly the Town Crier who, again if my memory serves me correctly, used to come around at about half past four, five o’clock on a Friday evening in immaculate dress – there’s a photograph in one of the magazines of him in his dress outside The Swan [pub] isn’t there – in one of these magazines I’ve seen – and he would come up and one of his places to stop was right outside the Wheatsheaf and he’d ring his bell and then all this business of -Oh yeah – and he would recount one or two sort of local events, and also I can remember father saying that if he was having a Sale in the shop, he could pay quite a small fee I should imagine, and he would announce that Robertson’s shop would have a Sale starting Monday the whatever – then when he’d finished his little spiel he would take his hat off and say God Save The King – bonk – and put it back on and off down the road, then he’d do the same again down where the mini roundabout is now, but of course in those days he stood right in the middle of the road, and there was damn all traffic about so there was no problem.