John Holland was born and brought up in Midhurst. He spent much of his working life in the area, serving his apprenticeship at Pescods, and later running the village shop at Graffham for many years. He made two recordings talking about his early life in Midhurst and the changes he has seen.

My name is John Holland and I was born in Ashfield Road Midhurst in January 1922. I would like to talk a bit about what Midhurst was like in the years of the 1920’s and 30’s. My first recollections I suppose are when I first used to go to the Half Moon School at the age of 4 but I will talk about the school presently. I would like to talk about some of the things that stand in my mind. Midhurst in those days had, for instance, a town crier Mr Howick (?) who came round the town in his uniform with his bell and gave out notices and Council happenings and various things – he is one person that stands in my mind and the other is, and I don’t know his surname, but George the lamplighter always intrigued me as a small child. He would ride his bike up the street and he somehow hardly ever got off – he had a long pole with a hook and he pulled the chains and got the lights on and in the morning he would come round and put them off. And he is a character that I remember vividly as a small boy. And of course, the age of the motor car was coming but there were still a lot of people and traders who used horse and carts. And I think of Mr Wells the milkman and he farmed near where I live at Lakeside in the Fairway. And he came round with his horse and cart and of course in those days, churns of milk and people put their jugs for the milk on the doorstep and then as a boy, one of the things we used to like to do was to go out and get the jugs for Mr Wells and then we could stand on the back of the cart because the horse knew exactly where to stop. He never stood by, he just went up the road knowing exactly where to stop and these are people and things that stick in my mind.

Midhurst – I suppose we were a quarter of the population that we are today. Everyone knew everybody. It was said that if you sneezed in the morning by afternoon everyone would ask how your cold was. But little things … I think another one was in those days when there was a death in Midhurst they rang (I don’t think in Midhurst it was called the “tailor bell”) but that’s how it came about – nine tailors make a man in Christ – and when someone died because of course there were no telephones – not for ordinary people – not to the workers – they used to ring and I still call it the “tailor bell” and there would be several strokes to make people aware and then there were nine strokes for a man and seven for a woman and a pause, and then they rang one stroke for every year of their life. And I can remember people used to stand out in their back garden like my mother and they would know and say “ah! That’s poor old Bill Jones, he’s not been well” and they could work it out from the tolling of the bell. I don’t suppose many people can remember that but it was always fascinating and nine times out of ten they were right. They knew who it was. 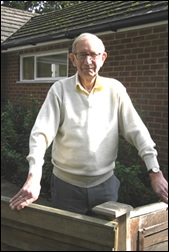