Marie Merrit came to Midhurst in 1956 to work with the polo ponies on the Cowdray Estate. She later married and settled in the town. She is committed to Midhurst and is a volunteer on many community projects

Male grooms were at Cowdray after the war, and up until the 50s – but they were then followed by ladies – I think we were kinder to the horses, possibly . Most grooms used to attend the local cinema in North Street, which has been a supermarket for years. There was a farrier to shoe the horses in Church Hill, and we rode them in on a regular basis. Most horses need new shoes at least every month. There were no mobile farriers then, as there are today.

We also rode to the polo grounds with three horses a piece – whereas today most ponies are taken in by lorry – but that’s understandable because of today’s traffic – but we always rode in and it was usually half an hour’s ride The Ruins iron gates used to stand where the bus station is alongside North Street, and at the end of a longer causeway. The gates were moved nearer to the Ruins some years ago and the cattle trough, which is now near the tourist office, also stood in the road near the gates – as you faced them from the road the cattle trough was on your left.

There were still three cobblers in [the] town during the mid 50s, who used to mend our boots. We all cycled into town along the private walk to do our shopping or attend the cinema, and there were few car owners then. Over supper around the Mess Room table we would discuss the day’s happenings on and off the polo ground, before walking to the White Horse at Easebourne for an evening drink.

Polo was revived at Cowdray after the war by the third Viscount, John Pearson.

Men were the first grooms, followed by girls in the early 50s. I commenced work there in 1956. Each girl had three horses to look after. There were three yards with a total of 60 – 70 horses, Cowdray, Todham and the Priory Stables. The local Cowdray Hunt also operated from the nearby kennels, which is now a dairy, and that was off Todham Lane. So during the winter months we also kept up to eight or ten hunters and we supplied three horses each time the pack went out – three horses per day.

During the autumn shooting season the girls would ride out with the beaters to move the pheasants towards the guns. They were told to tap their saddles with their riding crop and make a noise so that the pheasants flew up.

All the ponies owned by the Cowdray Polo Club were for hire, so a variety of riders passed through the season – ex soldiers, Gentry, sons of Maharajas, farmer’s sons and many more, including Royals. 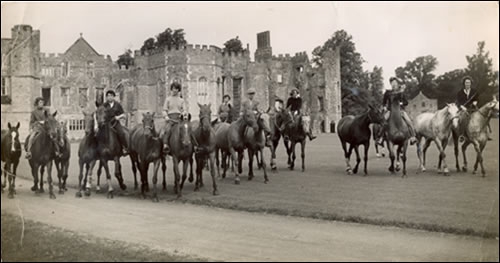