Tony Beck was born and brought up in Midhurst. He plays an active role in the community, is a member of the Town Council and comes from an established Midhurst family. Here he shares some of his war time memories

Right, now we start with the 1939-45 war. I do have to say that the importance and the effect on the local community escaped me because I was only 9 at the time and really didn’t know what was going on. But the prospect of seeing lots of soldiers around and perhaps parades and so on is what really attracted me to the war. But it had quite an effect on us as a family. We were allowed 5 inches of water in the bath, and we had a bath once a week which was on a Saturday night and I distinctly remember being all geared up for my weekly bath on this particular Saturday evening, I get into the bath and all of a sudden all the lights go out and there is a hell of a bang and in fact a series of bangs and in fact somebody who must have been a German was dropping bombs on King Edward VII Hospital. Now we had a complete black-out except for King Edward VII Hospital which was lit up like a Christmas tree, because it was a TB hospital it had all the doors and windows wide open, etc. and so forth, and you have to have a certain amount of light in the hospital. Anyway, this particular German pilot obviously decided Ah! There are lights down there I’ll drop some bombs, which he duly did. In fact he missed the hospital altogether and they landed in the woods immediately to the south. On another occasion we had a bomb drop right by the railway bridge in the Bepton Road which demolished the embankment and made the bridge there very unsafe. That was a bit too close for comfort. But the particular memory I have is, I think it was 1943, when I was playing in the garden in the front of the house and I heard this peculiar engine sound obviously an aeroplane of foreign extraction simply because it was a different note – it wasn’t a Rolls Royce engine, it was something else – I saw this aeroplane appear from the west and it drifted quite slowly down the valley towards the town and it had its bomb doors open – it was a Dornier 217 – and I ran indoors, screaming my head off, my father and mother were in the kitchen and all three of us tried to get under the kitchen table which was a bit silly really because it would only take one person. Anyway, the inevitable happened, big bang and that’s when they dropped a bomb on the Temple on the corner of Petersfield Road and Bepton Road and severely damaged the back of Cussies Row. And of course we came out and there was this great plume of smoke coming up from that area and yet another one beyond which was on St Anns because a bomb had dropped there as well and the rest of the stick fell in the polo grounds. Anyway, being a small boy I rushed down town to see what was going on and of course there were scenes that would have been seen in the London blitz being repeated on our front doorstep. There was the rubble, there was the smoke, there were the fires and there were the people rushing around.

One the thing about the Grammar School at that time, because there were 150/200 boys at the school, and we were the entire next generation of boys for the area, we were quite a valuable chunk of real estate I suppose, so we used to have an air-raid drill and for this drill, somebody would ring the school bell and we’d all in our classes rush up to Whip Hill and into a sunken lane which runs from Whip Hill farm to the top of Whip Hill and we were all packed into this lane until somebody pointed out that if a bomb happened to drop on that lot, the entire generation would disappear in one fell swoop. So it was not a very good idea and it was abandoned after a time. 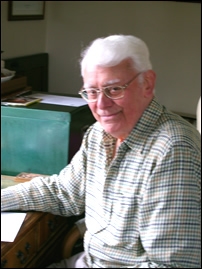